Amidst the many events this year celebrating William Smith and the publication of his map, comes another less well-known anniversary. The acceptance of continental drift led to a seismic shift in 20th century geology, the development of the theory of plate tectonics. This was the result of many technological and conceptual advances, one of which celebrates its 50th anniversary this year: the first mathematical joining of the trans-Atlantic continents by Sir Edward Bullard, Jim Everett, and Alan Smith.

The snug fit of the American continental coastline with the African and European ones had been noted ever since cartographers first charted them. Abraham Ortelius (1527-1598), in the 1596 last edition of his Thesaurus geographicus, is currently recognised as the first to attempt to explain this fit by positing that the continents were once joined together and then drifted apart: he considered America to be Atlantis, ripped from the European coastline rather than flooded (see Romm, 1994).

Other naturalists through the centuries came up with similar ideas, most notably Francis Bacon (1620, Novum Organum) and Antonio Snider (1858, La Création et ses Mystères Dévoilés), but it wasn't until 1912 that the first complete account of continental drift was written by Alfred Wegener in a paper in the Geologische Rundschau (Wegener, 1912). He subsequently published his thorough thoughts and arguments in a 1915 book, Die Entstehung der Kontinente und Ozeane (German: “The Origin of Continents and Oceans”).

Wegener amassed evidence from fossil distributions, isostasy, and geological and geographical continuities between today's continents, and postulated that the continents were once joined in a supercontinent called Pangaea, and they subsequently broke up and drifted apart to today's formation.

According to Wegener's scheme, Earth is made up of a series of shells differing in their compositions and densities. The outermost shell consists of continental blocks made of sial (silica and alumina), and blocks of sima (silica and magnesia) making up the ocean floor. Sial is less dense than sima, so the continents float. The science of the time allowed him to invoke two forces for allowing continental drift:

This theory of continental drift went radically against the two dominant geological theories of the early 20th century: permanentism and contractionism. Their names are fairly self-explanatory.

“Once a continent, always a continent; once an ocean, always an ocean” is a handy summary of permanentism by Yale's prominent permanentist, James Dwight Dana (1813-1895). The continents formed when the Earth cooled and have remained in the same positions since then. No continents or oceans were ever created or destroyed.

Contractionists thought that a homogeneous crust formed around the Earth as it cooled down. With cooling, the Earth also shrinks gradually, causing the crust to wrinkle and fold. Water flows into the valleys to form oceans, peaks were mountains. There were no compositional differences between oceanic and continental crusts. The process is ongoing, with periods of stability punctuated by periods of change, so new continents could form.

Until the middle of the 20th century, no one theory could prevail over the others, and drift in particular was the least popular. Wegener's palaeobiogeographical evidence was problematic for permanentists, but contractionists could realistically invoke now-sunken land bridges to explain biological movement between separate continents. On the other hand, isostasy is wholly incompatible with contractionism but is fine with drift and permanentism. Finally, the mechanisms invoked by Wegener to explain continental drift were simply too weak to make it a realistic proposition.

For more information on the competition between these three camps, Le Grand's 1988 book Drifting Continents and Shifting Theories is recommended.

The turning point came in the 1960s with several critical advancements, most importantly newly-obtained palaeomagnetic data showing without any doubt that the continents do indeed move, even following different motions.

An integral advancement that cemented the truth of continental drift took place exactly fifty years ago: the first mathematically-rigorous geometric reassembly of the continents, a work published by Sir Edward Bullard, Jim Everett, and Alan Smith in the Philsophical Transactions of the Royal Society in 1965 (Bullard et al., 1965).

Utilising Euler's theorem and a 500 fathom isobath as representative of the continental margins, they rotated the trans-Atlantic continents until they fit with a remarkable degree of precision. Geological and palaeomagnetic evidence confirmed that the resultant configuration was representative of 200 Ma, Late Triassic to Early Jurassic times. A few gappy areas were observed, mainly the Caribbean and Mediterranean, but these were “just where they would be expected in view of the considerable Mesozoic and Tertiary deformation in these regions.” 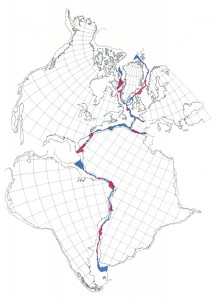 This work proved to be important in the transition to our modern thinking about seafloor spreading and plate tectonics, so much so that as of time of writing, it has been cited almost 1500 times, and the above map has been referred to as a “geophysical icon”.

Such a dry retelling of the story belies the complex social and scientific dynamics at play before and after the production of this seminal work. On its 50th anniversary, its worth reading a very interesting personal account by the two surviving authors, Jim Everett and Alan Smith: Genesis of a Geophysical Icon: The Bullard, Everett and Smith Reconstruction of the Circum-Atlantic Continents, available here for download.

In the 1950s, much doubt was still being cast on continental drift, especially by geophysicists. Everett and Smith detail the thought and influence of Sir Harold Jeffreys, who scoffed at any mention of continental drift because of its perceived physical impossibility. This opposition influenced the thinking of most geologists and geological departments.

Sir Edward Bullard led Cambridge University's small Department of Geodesy and Geophysics, a place where “scientific ideas were freely batted to and fro by everybody, from the head of department down to the newest graduate student” in the world map-covered coffee room. It was in this atmosphere that Bullard gave Everett and Smith their assignment.

In 1958, Tasmanian geologist Samuel Warren Carey had aligned the continental margins of South America and Africa, using transparent caps on a 75 cm-diameter globe. The fit was very good visually, but Jeffreys remained consistent in his denial of its possibility, going as far as denying that there is a fit.

Bullard thought that a mathematical fit would dispel doubts as to the accuracy of the fit of the continents. From September 1962, his PhD student, Jim Everett, was tasked with quantifying the fit between South America and Africa. Using dilligently-traced contours, his programming knowledge, and, unwittingly, Euler's theorem, Everett managed to compute a way to calculate the best fit for two lines on a sphere. The precise methods are detailed in the account.

While Everett was doing this work, Alan Smith joined the Department, originally to date the rocks on the margins of South America and Africa, but his goal quickly changing to attempt Everett's work on North America. This proved much more challenging: the mathematics and methods were worked out, but the fits were off because several features post-date the continental breakup (e.g. Iceland). Once these were accounted for, the fit was more or less spot-on.

By the end of their collaboration in 1965, Everett and Smith had effectively reconstructed Laurasia and Western Gondwana, backed up by a rigorous mathematical and geologically-informed map as the ultimate evidence of continental drift. With the impending acceptance of seafloor spreading, a plausible mechanism for drifting was finally provided and, at long last, the way was paved for one of the foundational principles of modern geology: plate tectonics.