Can you help the Archibald Geikie project?

Sir Archibald Geikie (1835-1924) was an eminent Victorian geologist, having been President of both the Geological Society of London, and the Royal Society, the only geologist ever to have held both positions. 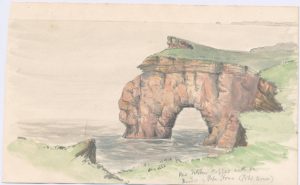 He retired in 1901 and moved to Haslemere in 1913 where he became chairman of the Haslemere Museum in 1914, after the death of its founder, Sir Jonathan Hutchinson. The Haslemere Educational Museum now holds a significant archive of material related to this important geologist, including letters, field notebooks, photographs, watercolours, personal ephemera, rocks, fossils and minerals.

How you can help

John Betterton, the Museum’s geologist, is planning a book to showcase this remarkable archive, which will be published by the Geological Society of London. He is seeking assistance with this project from anyone knowledgeable about Geikie who might be prepared to contribute a chapter to the book. If you would like to know more about this project, please contact John Betterton at collections@haslemeremuseum.co.uk. 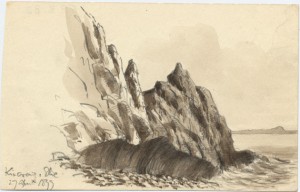 As part of the wider Geikie Project, the Sir Archibald Art Collection  would also like to enlist your help to identify the many geographical locations that Geikie visited during his geological research activities. Of extreme value would be to create a concise geological description of what the artwork is depicting.

The site has 726 examples of his artwork online for examination. By simply clicking on the search button (without filling in any of the search fields) all 726 images will be displayed. Alternatively, the artwork can be searched by main feature: general landscape, coastal, lake, mountains, seascape, outcrop and architectural etc. It can also be searched by date: 1850s, 1860s, 1870s, 1880s, 1890s and unknown date.

If you have any information about any of the locations depicted, a reply e-mail address is given on each image, along with its unique catalogue number as the subject.

Archibald Geikie was born in Edinburgh on 28 December 1835. In 1854, he joined the staff of the Geological Survey which was then under the directorship of Sir Roderick Impey Murchison. 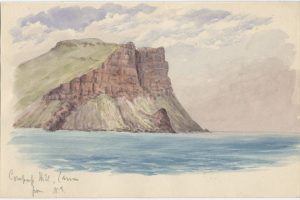 Largely through the influence of Murchison, he was admitted as a Fellow of the Royal Society at the age of twenty-nine, and in 1867 he was appointed as the first Director of the Geological Survey of Scotland. In 1871 he became the first Murchison Professor of Geology and Mineralogy at Edinburgh University. In 1882 Geikie became Director General of the Geological Survey of Great Britain, and remained Director until his retirement in 1901.

Geikie became the foremost advocate of the fluvial theories of erosion which illustrated the physical interaction of flowing water and the natural channels of rivers and streams, and the processes behind the denudation of land surfaces. Geikie was President of the Geological Society of London, 1891-92 and 1906-08, and President of the Royal Society 1908-13, the only geologist ever to have held that honour; he was knighted in 1891. Sir Archibald Geikie died at Haslemere, Surrey, on 10 November 1924.