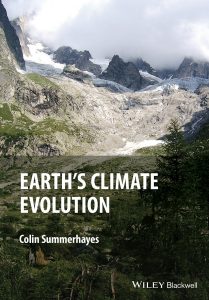 To understand climate change today, we first need to know how Earth’s climate changed over the past 450 million years. Finding answers depends upon contributions from a wide range of sciences, not just the rock record uncovered by geologists. In Earth’s Climate Evolution, Hogg member Colin Summerhayes analyzes reports and records of past climate change dating back to the late 18th century to uncover key patterns in the climate system. The book will transform debate and set the agenda for the next generation of thought about future climate change.

Summerhayes takes a unique approach to the subject providing a description of the greenhouse and icehouse worlds of the past 450 million years since land plants emerged, ignoring major earlier glaciations like that of Snowball Earth, which occurred around 600 million years ago in a world free of land plants. The book describes the evolution of thinking in palaeoclimatology, introducing the main players in the field and how their ideas were received and, in many cases, subsequently modified. It records the arguments and discussions about the merits of different ideas along the way. It also includes several notes made from the author’s own personal involvement in palaeoclimatological and palaeoceanographic studies, and from his experience of working alongside several of the major players in these fields in recent years.

This book will be an invaluable reference for both undergraduate and postgraduate students taking courses in related fields; it will also be of interest to historians of science and/or geology, climatology and oceanography.

To obtain a 20% prepublication discount before May 2015, quote the code EES14.