Ghosts of the Museum

On 6 November 2014 the Upper Library of the Geological Society of London was transformed into its previous incarnation as the Society’s Museum, in order to provide the venue for ‘an elementary class on fossils’ given by Edward Charlesworth (1813-1883), geologist and would-be curator of the Museum.

Until 1911 specimens of the Society’s collections occupied the library shelves which were closed as panelled cupboards – the Fellows’ room off the library still has shelves behind the wood panelling. The library was arranged as a class room with ‘lanterns’ on the student’s tables, a pair of great elk horns above the black board, and a large fossil rhinoceros skull at the entrance. The shelves surrounding the students on the main floor were labelled by Period and by geographical location along the galleries for the imagined fossils.

The scene was thus theatrically set for our instructor to give the lesson.

Charlesworth was played in academic gown by Ted Nield, author and editor of GeoScientist.

Charlesworth started promisingly with a notable paper, ‘The Crags of East Anglia’ which led to his election as a Fellow of the Geological Society in 1835. He then pursued a museum career, coupled with the editorship of several short-lived geological journals. In 1842 he applied to the Geological Society to succeed William Lonsdale as Curator and general factotum but was rejected due to his editorials which attacked William Buckland, Charles Lyell and Richard Owen.

His opinionated editorials, printed in the Magazine of Natural History and its successor Annals of Natural History, provoked at least one libel suit and angered eminent members of the Geological Society. Subsequently he started the London Geological Journal in 1846 which failed after three issues. He attended meetings at the Geological Society, often arguing loudly and at length about its management. While his points may have occasionally deserved attention, he was too “often aggressive and needlessly offensive, and his want of tact … in critical remarks ... Charlesworth came gradually to lose position and friends”’.

In reality the event on which the evening was based, never actually happened, but it might well have and, in any case, it certainly felt ‘real’.

From the above précis of and quote from the programme notes, some in the audience may have feared a rough ride, but in fact Ted Nield eschewed what he referred to as the ‘am dram’ approach and gave a very clear and helpful lesson distinguishing between drawing and diagrams. The former employs shading and replicates a specific fossil. For the latter, lines are used to illustrate a fossil type with labelling for didactic purposes. 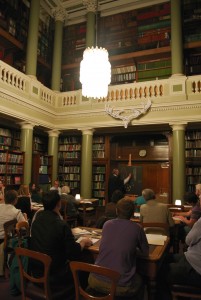 Ted was admirably suited for teaching the lesson due, not only to his encouraging and kindly manner, but also to having written and illustrated, in an earlier life, Drawing and Understanding Fossils (1987) and (with VCT Tucker) Palaeontology: anIntroduction (1985) for Pergamon Press, Oxford. Both are sadly out of print and fail to appear in Google searches. Ted guided us with a few ‘cartoonist’s tricks’ - drawing taut springing lines with a sweeping fore-arm motion. For models we were provided with casts manufactured by another notable HOGG member, Stuart Baldwin, and a choice of actual fossils, all on loan from the Natural History Museum.

Each of the 24 pupils received a clipboard of blank specimen pages to limn their fossils. On the reverse side of pages were humorous information sheets in Victorian hand-bill style about Charlesworth, his career, inventions, the British Natural History Society (of which he was the only member),  and the former Museum.

Thanks go to the Society’s archivist Caroline Lam, who conceived this meeting and who persuaded Ted to demonstrate his skill and share his knowledge and cartoonist’s tricks. One of the day’s students, John Henry, asked Caroline how the concept of this meeting came about.

She said, “I wanted to do something on the old Museum using the space which it left.  Parallel to this, I was keen on doing a drawing class of some sort on fossils as I thought people would be interested. On finding out that Ted had written a book on how to draw fossils, well it all came together”.

Caroline added that Nield agreed to do it on two conditions, the first being that he could dress up and the second that he could use a blackboard for drawing his fossils.

She continued: “Following on from this, it made sense that he might want to channel one of our old, embittered curators (of which there were many) for the evening. ... the focus soon settled on Charlesworth as he was so unusual.  In the archives there is indeed a file on the special committee which met to consider his rejection and we also have Greenough's contemporary notes on the issue”.

Thanks to Ted Nield, who brought the event alive, and mercifully was himself rather than the unfortunate Charlesworth. Thanks also to the library staff who together achieved the transformation and assisted the pupils on the night.