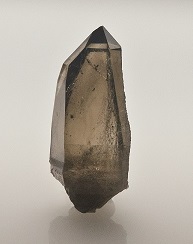 Crystal Mountains – Minerals of the Cairngorms by HOGG Member Roy Starkey explores the long tradition of hunting for ‘Cairngorm stones’, which saw individuals – and even whole families – driven to search the mountains with zeal akin to the lust for gold.

The Cairngorms is an area of dramatic and rugged scenery which has given its name to Scotland’s most famous gemstone – the distinctive, smoky, amber-coloured ‘Cairngorm quartz’, a term recognised globally by the jewellery trade, and which has for centuries adorned traditional Highland dress. The area is recognised formally by its designation in September 2003 as the UK’s largest, and most northerly, National Park. It is home to five out of six of Britain’s highest mountains and the Queen’s summer residence at Balmoral.

The book’s author, Roy Starkey, has been fascinated by minerals since he was at school and has travelled all over the UK in his search for worthwhile specimens. He has a particular interest in the minerals of Scotland and has been exploring the Cairngorms for more than 25 years. Roy said, “My love of the Cairngorms grew from exploring the wilderness areas and researching the fascinating history of the minerals and the people who sought them in days gone by”. He realised that he had gathered together a unique collection of information and decided to compile what he hopes will be the definitive work on the subject.

The fascination of Queen Victoria and Prince Albert with Scotland’s national gem, and the surviving legacy of their specimens, are explored using the Queen’s personal journals and contemporary newspaper accounts, together with images of specimens from the collection at Balmoral Castle and Osborne House. A supply chain is traced from ‘The Diggers’ who sought raw material, through mineral dealers, lapidaries, seal engravers and jewellers who all earned a living trading in ‘Cairngorm stones’. The principal centres for the Scottish lapidary trade appear to have been Edinburgh and Aberdeen, but with several notable businesses also prospering in Inverness, and others in Dundee, Perth and Stirling. The story culminates in the Great Exhibition of 1851, which provided a shop window to the World for Scottish goods, including natural Cairngorm crystals, and the jewellery and other artefacts fashioned from them.

Roy’s quest has seen him examine specimens in all the major public and private collections, and the book features numerous previously unpublished images of specimens from the Cairngorms. The book traces the history of the Cairngorm (and the associated topaz and beryl crystals which are found in the region, although of much less common occurrence than quartz), and also presents a very readable account of the geology and occurrence of the gem minerals, including an easily understood explanation of the cause of colour in smoky quartz.

The days of the ‘diggers’ and ‘Cairngorm miners’ are long gone, but there may still be forgotten treasures scattered in attics and trinket boxes across the area, just awaiting discovery by the next generation. Queen Victoria’s mountains attract thousands of visitors each year, and the links with Balmoral remain as strong as ever. Scottish pebble jewellery is now a highly collectible commodity, and an authentic Scottish Cairngorm brooch would undoubtedly still make a most acceptable gift.

Crystal Mountains – Minerals of the Cairngorms, is available direct from the publisher www.britishmineralogy.com 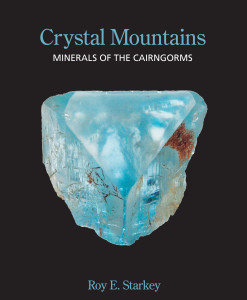