The book is available for sale in the library of the Geological Society and through the Worple Press website. 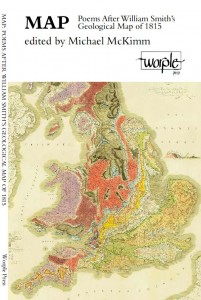 This is a remarkable anthology of poetry; I cannot think of another geological map or geologist that is so honoured. It is a wonderfully diverse creative response to William Smith’s map, his unique insight and his dramatic life story, evoked in 42 poems from 31 invited poets. The editor, Michael McKimm, is a poet whose day job is librarian at the Geological Society. Previously, he has organised two successful Geology and Poetry Days and attended several geological field trips as poet-in-residence, and so is well placed at the intersection of these two worlds to conceive this anthology and attract the poetic talent. McKimm notes in his introduction that “these poems illustrate not only the vibrancy and variety of contemporary poetry but also poetry’s unique ability to take on uncharted territory with vision, to make connections and find relevance: the poems here make Smith’s map anew in moving and surprising ways”. Smith himself took on uncharted territory 200 years ago.

In his introduction, McKimm outlines Smith’s life to provide the context for the poems. This is very helpful. Greater familiarity with Smith’s story and his map raises awareness of many allusions and references. The quality of the poetry is professional and alive. The form varies from formal sonnet and ode, and an almost-haiku to completely free verse.  There are two experiments in layout that, I think, indicate faults through the poetic strata. Some poets respond viscerally to the colour and structure of Smith’s map. Others start from a familiar location and visualise an aspect of his life. Still others start with incidents in his Smith’s life such as his 1799 dictation of Order of the Strata and their embedded Organic Remains to friends in Bath, and the rivalry of his map with Greenough’s. Two poets bring rather arcane knowledge to reveal Smith in a continuum with ancient Egypt and Greece. Several link their own personal geological/landscape experience to Smith’s great achievement. His marble bust and portrait inspired other poets. One poem in others’ voices brought to me new insight into Smith’s unhappy marriage. McKimm has attracted substantial talent to his anthology; most were unknown to this reader apart from the former Poet Laureate, Andrew Motion, whose moving poem, ‘The Afterlife of William Smith’, is in Smith’s voice.

The Smith map on the cover of MAP is the recently discovered very early version belonging to the Geological Society. As Smith’s maps were hand-coloured and as he introduced new information during the initial two years of its production, no two maps were identical at the outset and all have weathered to some degree over the past two centuries. The recently found copy is a particularly bright and vibrant survivor.

I heartily recommend this anthology. For the geologist, the insights of (mostly) non-geologists are thought-provoking and insightful. For the poet, and the poetically inclined, this anthology is a model for the imaginative and poetic visualisation of landscapes, geological detail, historic incident and great characters. I congratulate Michael McKimm for his vision, his ability to assemble so much talent and his realisation of such an attractively produced volume with Worple Press.