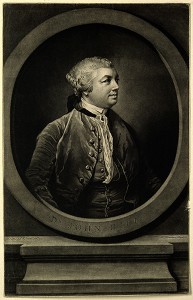 John Hill could justly be considered a typical Renaissance Man; his published contributions spanned translations, plays, fiction, satire, theology, history, astronomy, microscopy, zoology, botany, horticulture, medicine, geology, and the conduct of married life. Born the second son of the rather impecunious Anglican cleric, Theophilus Hill (1673-1746), John, a voracious reader, was systematically educated by his father, with an emphasis on classical languages and botany.  This was to hold him in good stead when he later became apprenticed to an apothecary and, following an M.D. from St Andrews’ University (in absentia), he began his excursions into the world of publishing.

Somewhat vilified by his contemporaries on account of his abrasive, highly competitive, ambitious character and scandalous behaviour, John Hill nevertheless made significant contributions to both medicine and geology. His A History of the Materia Medica (1751) represented a fitting syncretism of the two sciences; over one third of the volume was dedicated to a discussion of the supposed therapeutic uses of geological materials, just as the popularity of many of them was declining in the wake of the welcome rise of empiricism. He also contributed works on cancer, gout, renal calculi, nervous disorders, hypochondria, senescence and, through his botanical publications, an enormous body of knowledge on herbalism.

His geological contributions made him a significant though much neglected figure in the Georgian history of the science.  In 1746, he produced the first English translation of Theophrastus’s foundational History of Stones from the original ancient Greek.  Embellished with copious notes and observations, the book was well received and formed the basis of a later French translation; it would be 200 years before another English translation was produced.  Friendly relations, joint collecting trips and positive co-operation with the naturalist Emanuel Mendes da Costa (1717-1791) degenerated to accusations of philosophical piracy and plagiarism over plans to produce a volume on ‘fossils’ (in the sense of any geological material) after da Costa was elected FRS in 1747.  In the event, two quite different works were published, with Hill beating the somewhat beleaguered da Costa to press.  Hill’s A History of Fossils (1748), the first of a three-volume series on natural history, was followed by his Fossils Arranged According to their obvious characters in 1771 and a work on spars (1772).  Characterised by a competent grasp of earlier literature, an innate desire to systematise an approach to geological materials somewhat emulating Linnaeus’s approach to botany, Hill’s geological works are replete with original observations and expressions of his personal opinions.