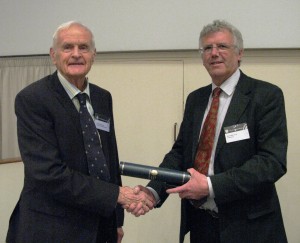 This year, the Geological Society of London has awarded its Sue Tyler Friedman Medal, awarded for excellence in research into the history of geology, to Dr. David Branagan of the University of Sydney, left in the picture.

David approaches the history of geology and mining from the point of view of one who graduated in Geology from the University of Sydney in 1950.  He then joined the Geological Survey of New South Wales and mapped Permian Coal Measures, as well as Lower Palaeozoic and Precambrian sequences.

During this stage of his career he also became involved in engineering geology and while subsequently working as a Research Fellow at Sydney, specialising in coal and its utilisation, David was awarded his PhD in 1963 and went on to teach mining engineering geology, photogeology and field mapping for about 30 years, retiring in 1989 as Associate Professor of Geology.  He thereafter continued his association with the University, becoming an Honorary Research Associate of Geology, History, and History & Philosophy of Science.  He was Foundation editor of The Australian Geologist (1974-1984), President of INHIGEO (1992-1996), and was awarded an Honorary DSc by the University in 2007.

Of his 20 or so books and 230-odd papers and articles, about 130 have been dedicated to the history of geology and related sciences.  This work includes numerous papers and books on famous Australian geologists and explorers J W Gregory, S Stutchbury, and many others. His book on T W Edgeworth David, published in 2005, recounting the life and career of this legendary Welsh-Australian geologist, Antarctic explorer, co-founder of the Australian Army Tunnelling Corps in World War One and inveterate campaigner for science on a global scale, has enjoyed a thoroughly deserved success, worldwide.

Dr. David Branagan’s acceptance: “I am honoured to be the 2015 recipient of the Sue Tyler Friedman Award, Today I am joining the ranks of numerous more distinguished historians of geology than myself, and to whom I owe much for their advice and friendship. I am the fourth Australian to have received this award, preceded by Tom Vallance, David Oldroyd and Homer le Grand, so the former colony has yielded perhaps unexpected value(s).! It was my good fortune to have known Sue Tyler Friedman through her husband Gerald Friedman, to note their dedication to the history of Geology, and to have enjoyed their company at history conferences and excursions. This award is a tribute to their joint memory. Gerald will be remembered for his fine texts on sedimentary geology, and by the founding, and, I suspect, their joint funding of the journal, Earth Sciences History, of which he was the original editor; a journal which has built up an international reputation for its quality, through the continuing enthusiasm of its editors. I have been lucky to have worked largely on Australian material, starting my interests when there were few researchers in the field, finding much basic information in Europe and the Americas.  Through Tom Vallance, I met the pioneer couple, Joan and Victor Eyles, and became a contributor to the Australian Dictionary of Biography. It was Tom whose criticism ensured that the scientists who contributed considerably to Australia’s development received due recognition in its pages. There is still much history to be researched, and sadly, for many, it can only be a part-time effort. In recent years numerous superb publications tell us about the latest geology and geophysics. But the general reader might almost assume that the knowledge of the Earth came out of thin air. While some pioneers are relatively familiar names, other important, but less-remembered, persons deserve to be honoured.”

On the Sue Tyler Friedman Medal: The award was established by Gerry Friedman in 1987 by a gift of the Northeastern Science Foundation Inc. of Troy, New York, and dedicated to his wife Sue Tyler Friedman. The award is made annually, or at such intervals as the GSL Council may determine, in recognition of distinguished contributions to the recording of the history of geology.